In reference to the mirror below we are looking at “Swedish Empire”. The Swedish Empire period was, roughly, between the years 1810-1840. The style is characterized  by pomp and pageantry and is sometimes referred to as Imperial. The French Empire is often associated with Napoleon Bonaparte who was fond of ancient Rome and its attributes. Egyptian features with sphinxes, palettes, eagles and griffins were common as decor elements. At that time mahogany was most popular in France. In Sweden birch and pine are the most used. Chiffonier was a fashion furniture in empire, dressed in bright bold colors. The period of 1830-40 (Sweden) is referred to as “senempire” and the decorations were more civil. Empire came to Sweden with Jean Baptiste Bernadotte (a commander in Napoleons southern army) and in two years was appointed and became   “King Karl XIV Johan” and later was called “Karl Johan” Compared to the French empire the Swedish style is slightly lighter and less majestic. 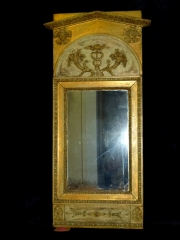